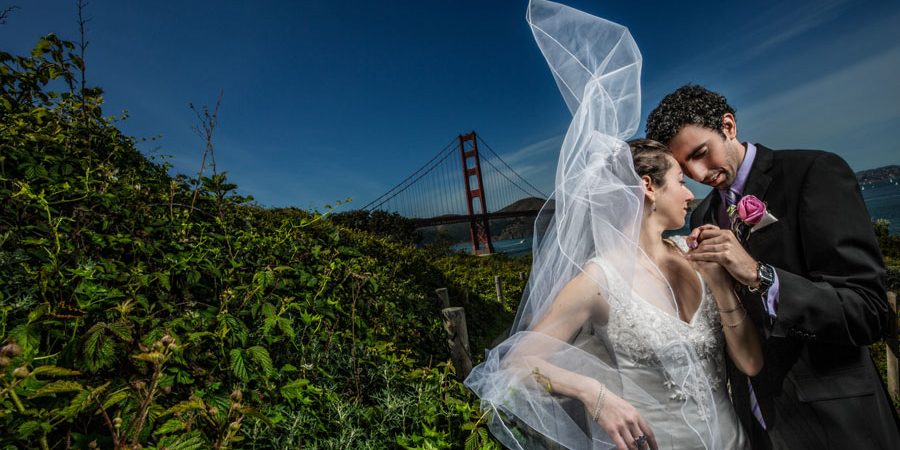 Even though it’s raining today, this past weekend was absolutely gorgeous. The sun was shining, the birds were chirping, you name it! Kira, Osher and I ventured out to the Golden Gate Bridge for their pre-wedding photoshoot, and along with the gorgeous weather, we also got a lovely San Francisco breeze, which helped create this photo! 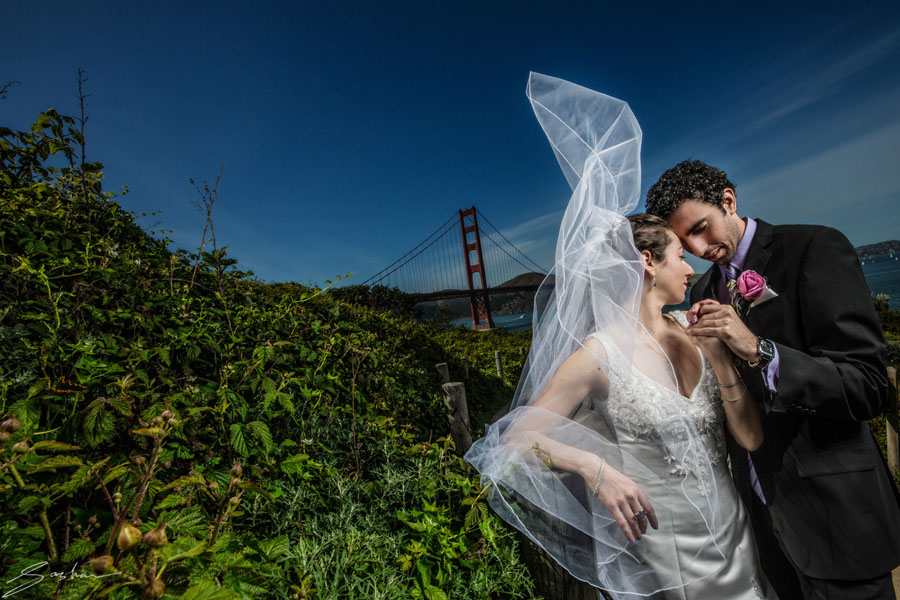 Update: after they saw their wedding photographs, Kira and Osher shared this feedback with me:
—
How good is Sasha? So good that I received our wedding photo slideshow a day and a half ago, and I have watched the video at least ten times (even while at work), with a giant smile on my face each time. But let’s start at the beginning.

Before I committed to Sasha, I watched him in action as MOH at my best friend’s wedding. Sasha would get on the cold dirty ground and contort his body to get that perfect shot. I was impressed with the commitment and my friend’s beautiful wedding photos that resulted. My expectations for my own wedding were now very high.

Sasha was very communicative throughout the entire process. From the first email, he always replied quickly and thoroughly. He didn’t think I was nuts when I sent him my photography plans months before the wedding, but actually read them and understood what I wanted. He researched in advance all the places where we wanted to take photos, including visiting the venue. He even asked for all the names of our immediate family members so he could direct people individually during the family photo session, and got the names right!

What I really appreciated about Sasha was that he was very accommodating to get my business. Some vendors I researched were very strict with their packages, and were even a little condescending when I explained to them our budget. Not Sasha. After a few back and forth emails, we found a compromise that worked for both of us.

The day before the wedding, Sasha proactively checked in with me to see if anything changed since we last spoke. At that point, I was so exhausted with the wedding/visiting family that I was expecting the vendors to do a “good enough” job without further instructions (resulting in some things not going as planned), but Sasha wanted to be perfect. He even went out of his way to take photographs of the groom offsite himself, when originally we planned his assistant to do that part.

Once Sasha arrived, he was like a magician. He found the angles and lighting of our home to make the shots beautiful. As we drove throughout the city, Sasha found creative ways to capture the images we wanted. For example, we wanted a shot with the Golden Gate Bride in the background. Sasha found a dirt parking lot away from the swarm of tourists, found a tree stump to elevate us, and used the wind to make my veil look ethereal and romantic. And yes, he got down on the ground, covering his back with leaves and dirt, to capture just the right angle. Also, our ceremony was in a very old, drab-looking space. No amount of decor would help it, so we didn’t decorate it at all. Sasha used his photography magic (not Photoshop!) to make the space look much better than it does in real life.

The most important part though is that Sasha made us feel at ease. It was like having a long-time friend take your picture. He was relaxed, making us relaxed, and even though we were pressed on time, he didn’t appear rushed. He was so calm and prepared that we were able to completely trust him and his vision. We felt like models as Sasha made slight adjustments to each pose, but let us be ourselves and feel comfortable.

At the venue we met up with our families for family portraits. As mentioned, he called everyone by name, organized people based on my list, managed to make even grandma smile, and very efficiently boom, boom, boom took all those photos. (Did I mention he did this in two languages in addition to English?) After this, the ceremony/reception began, and Sasha became “invisible.” He stood in places where he was not intruding, but was still able to capture the most interesting photos. However, we were able to tap him on the shoulder and he’d instantly switch gears to photograph a posed group shot.

When Sasha’s contracted time was up, he proactively told me and asked if we’d like him to stay longer. The wedding was winding down, so we declined. But that was very much appreciated rather than a “gotcha!” after the wedding.

The day after, when we were spending time with our family, Sasha emailed us a teaser photo. As I passed my phone around the room to show the 20+ family members, everyone ooh’ed and awe’d or just was stunned silent — the photo was just SO amazing. We looked like ourselves, sure, but the most beautiful, idealized version we could imagine.

I guess we’re lucky that our wedding was off-season, because only a few days later Sasha shared a highlights album with 20 photos. We were surprised at some of the shots, not just at how amazing they (and we) looked, but also at the moments he captured. For some, we didn’t notice Sasha at those spots at that time, and for others, we just didn’t notice those moments at all (your own wedding is a big, big blur.)

Sasha’s professionalism, communication, friendly style, ability to adapt, and the amazing results exceeded my very high expectations. I would recommend Sasha’s photography services to any wedding couple. (And he’s a big supporter of same-sex marriage, so really, ANY couple!) He is worth every single penny. My fiance was initially in shock at the sticker price, but ate his words when he said “WOW” after we watched our slideshow together the first time. I hope to never ever have to plan a wedding again, but Sasha is the one vendor I would hire to do exactly the same job as he did.