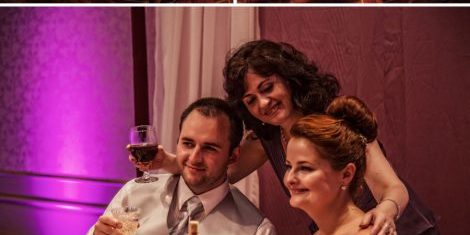 Life is full of interrupted connections, but sometimes it also comes full circle. 20 years ago, my father took a studio photograph of Masha and her twin brother – mere children then – and exactly 20 years later, I was on hand to document her wedding. It was an incredibly meaningful for me to be capturing her Jewish wedding at Temple Emanuel in San Francisco. The day began in San Jose. I arrived to document Masha’s preparations, and discovered that the very same image my father made was hanging on the wall inside her home!! After some fun preparation moments and emotional first look with Eugene, we traveled for wedding portraits at the Legion of Honor in San Francisco. When the time finally came for the wedding ceremony at Temple Emanuel, I was awestruck by the setting. Temple Emanuel is truly a majestic synagogue, the kind of space that both humbles and inspires its visitors. Another wonderful feature of the venue is that the guests literally had to just go downstairs for the party. And what a party it was! Masha is a former ballroom dancer and instructor, and so the couple had prepared an elaborate first dance. Unbeknownst to the bride and groom, their friends had prepared an elaborate flash mob dance, set to the Spice Girls’ classic “Wannabe”. You can see Masha & Eugene’s Temple Emanuel wedding videography here! It was an intense day: emotional, nostalgic, and full of tremendous energy until the very last song sounded on the dance floor.