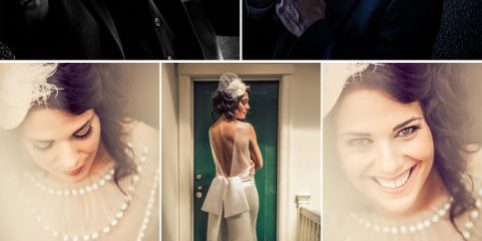 Wedding photography is symbiosis. Brides and grooms find my work, and it inspires them. Then I document their wedding, and I’m inspired by what I see, what I capture. And so on. Stephanie and Neil told me that my work inspired them, and in turn, their wedding at Axis Cafe was inspiring because everyone who showed up – the bride and groom first and foremost – contributed a very distinct presence and sense of style. Stephanie was dressed in a gorgeous and sensual gown, and Neil went three-piece. A stunning combo. They opened the doors for their guests, and their wedding day was instantly filled with a flood of creativity and joy. Most obvious were the myriad hats on display – elegant, funky, unexpected. After the ceremony, an a capella group helped the guests decompress from an emotional ceremony, as Neil and Stephanie looked on. A huge “L’Amour” neon sign – a gift – presided over the reception. I was happy to have the sign in the room, not only because it was simply awesome, but also because its warm, gentle light allowed me to throw an 85 1.2 on my new 5D Mark III and push it to its ISO limits. (Yes, that was a shameless, geeky, gear plug.) After numerous touching, hilarious, even interactive toasts, the night wound down at Axis. Outside, fire dancers began practicing their craft, and I invited Stephanie and Neil to step into the warm April evening for a final portrait.